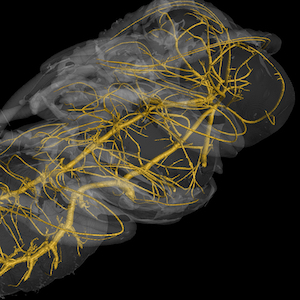 Bio-inspiration from micro-fluidics in the insect tracheal system

The respiratory system of insects is evolved to deal with water in the tracheae. Water could enter the tracheae during submersion, but during embryonic development the tracheae is liquid-filled and transitions to air-filled. In addition, periodically during juvenile stages, the tracheal system is filled with liquid as the old tracheae are removed during the process of molting. Our long-term goals are to

In addition, x-ray images of developing embryos shed light on the routes of fluid movement during air-filling of the tracheae.

Our short term goals are to develop the model for fluid movement and prepare the first manuscript stemming from this project. We have data collected for a manuscript and would benefit from a three-day workshop to get the manuscript to a publication-ready state.

Building predictive models for the development of respiratory function